French herringbone parquet has always been considered a symbol of timeless elegance.

The French herringbone is in fact an installation geometry of very ancient origins. An unmissable element of the French courts, it characterized the splendid wooden floors of the Royal Palace, as well as those of all the most prestigious salons of aristocratic France.

Always considered one of the most refined laying geometries, the herringbone is returning particularly in trend today, both to satisfy the tastes of those who love classic parquet, and for those seeking to give a touch of style to their furniture.

In addition to the Italian and Hungarian herringbone laying, you can therefore also opt for a French herringbone parquet: distinct, sophisticated and always a la mode.

The secrets of the French herringbone parquet

The peculiarity of the herringbone installation pattern is represented by strips that proceed parallel to each other, approaching in a “V” shape to those of the adjacent rows. The union of several rows of strips creates a straight line in the center of the spine, which favors the formation of regular, symmetrical and elegant patterns.

French herringbone parquet is distinguished from other herringbone floors by its traditional 45 ° cut of the heads, so that these form an angle of 90 ° when placed together. This pattern is often referred to as the “Hungarian herringbone”, even if, actually, the herringbone pattern where the heads are cut at 30 ° or 60 ° is generally considered to be the proper Hungarian one.

The final effect on an environment in which a French herringbone parquet has been laid is that of a visual expansion of the spaces. Its unmistakable style is also able to enrich any home or commercial space with personality. 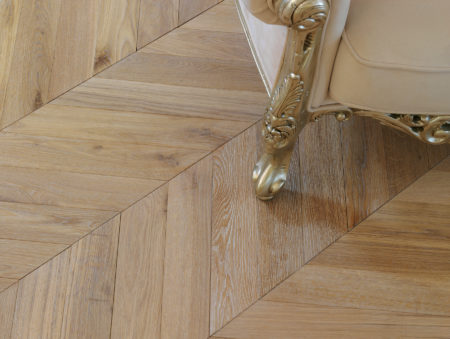 The perfect materials for a herringbone wood floor

At the court of the Sun King all the rooms were made up of beautiful wooden floors. What adorns the Palace of Versailles, the sumptuous residence of Louis XIV, is a perfect example of impeccably preserved French herringbone parquet.

At the time, the most common wood species for the realization of this royal type of parquet were walnut, cherry and beech, which were mixed together to create unique and unrepeatable plays of colors. Today, these materials have been almost completely replaced by oak.

Parquet continues to be the best choice to give comfort and naturalness to the home. In addition to the color of the wood and the size of the planks, it is also essential to carefully choose the installation geometry, to best enhance your environments. 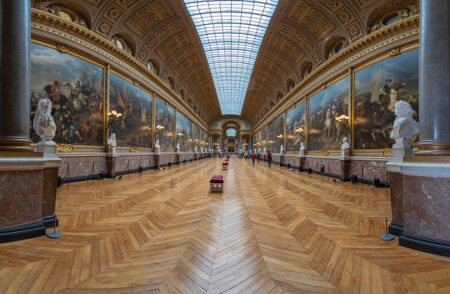